Red, her Biel-Tan Ynnari fighting for the Imperium, ran a 2000 point list for the Warhammer 40k Fate of Konor campaign.

I made some minor adjustments to the list I took for the FLGS 8th Edition tournament. It brought everything up to a 2000 point level and added in the Visarch for my Warlord, since it is now required that he, Yvraine, or the Yncarne be the army warlord for you to have access to Ynnari. I know Visarch may not be the best pick, but he fits in well enough with this army. Maybe later I will switch him and the Windriders out for Yvraine and some Dark Reapers. 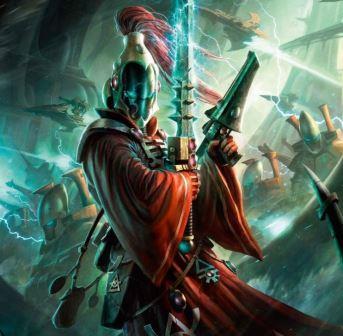 My opponent had the strangest list I have been up against so far. Irked by the lack of specific 30k Raven Guard units in the 40k rules, my opponent proxied his entire 30k army using character datasheets since the models he was fielding were supposedly that much better than normal Space Marines.

One of the most obnoxious parts about this list, besides me being only able to target whichever model was closest to my units, was the Command Point [CP] spam. Throughout the game, Guilliman allowed my opponent to roll a die and, on and 5+, regain a spent CP. It ended up with him getting approximately double the CP he started with (which was something like 9) since I only began to question the rule about halfway through. It turned out that you rolled a die for each CP spent, instead of rolling a single die and getting all CP he spent on one stratagem back on a 5+. He typically used Strategems that cost 2 or 3 CP and rolled a die to get them all back, using the command reroll strategem if he failed the first time.

The second week of the Fate of Konor campaign gave us a mission of killing each other – one (1) victory point per unit killed or two (2) if your squad that killed said unit had a 2+ or 3+ unmodified armor save. Past that, whoever was the Defender (me in this case since we agreed it would be wierd to have the Imperium take Chaos’ place if the random roll ended up oddly) also scored one (1) victory point for each unit in the Defender’s deployment zone.

The game had us alternate placing units, starting with me as Defender. I placed conservatively since I would go second unless I could seize on a 6+. It left most of my army hiding behind the Fortress of Redemption, only one squad of guardians and a Warlock deployed actually inside one side of the fortress.

My opponent set up seven of his Vindicares and Guilliman in the rear of a small forest, a squad of tactical marines out in front to soak enemy fire. He nominated the Captains, Shrike, and three Vindicares to be in Reserve and set up the second tactical squad in one end of the ruined Fortress of Redemption. 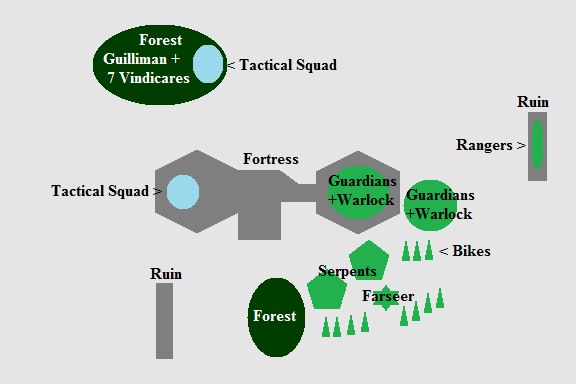 After we finished deployment, my opponent then set the 3 Vindicares he had held in reserve up in the top of the tower of the fortress via their deployment ability. We measured the distance directly, although I realized after this had happened that doing so made the tower almost impossible to scale since it is approximately seven inches tall from where the walkway intersects with it.

The game had me roll a die in an attempt to Sieze the Initiative, which I failed; so my opponent went first, using his Vindicares to kill off one Warlock, strip 2 wounds off my Farseer, and reduce the Guardian squad in the fortress to 2 bodies and their support weapon. I proceeded to use the Insane Bravery strategem to have them auto-pass their morale test and keep their missile launcher around for one more turn.

In response, I walked the other set of guardians into the fortress, so they were within firing range of the Vindicares as well, the two squads’ combined shooting killing one and dropping a second to one wound. The serpents advanced, one making it to the other side of the fortress with the other swinging around farther back. One set of bikes jumped into the Fortress walkway, while the other two reposistioned into the nearby forest. The combined shooting of the bikes and serpents then vaporized the two squads of tactical marines.

My opponent rolled for and brought in Shrike and the captains, who hung out in the ruins near my forest-hidden bikes; meanwhile, the Vindicares finished off the little guardian squad and stripped one wound off my second warlock. Guilliman left the snipers to charge one of my Wave Serpents.

In response, my shooting killed 1 Vindicare and did some damage to Guilliman after the first Wave Serpent fell back a bit. The strange Raven Guard doctrine kept the captains and Shrike safe since they were outside of 12″ and subtracting from to hit rolls really can decrease the number of wounds output.

Shrike and his captains then charged the Farseer, killing him before consolidating into a bike squad that would fall back before any blows could be struck; meanwhile, Guilliman charged my Wave Serpent again and killed it, ejecting the embarked Fire Dragons, who I carefully set up to ensure Guilliman could not consolidate into them.

The other Wave Serpent then disgorged its cargo of Wraithblades, the Spiritseer, and the Visarch in preparation to charge Guilliman in case shooting did not kill him or he resurrected after dying. Thankfully, the combined power of the army’s shooting and smite laid the primarch low, and he failed his resurrection roll. Besides that, whatever other firepower I had went into the last Vindicare up on the fortress roof and killed him.

Out in the open again, Shrike and the captains charged two of my bike squads and managed to kill one before the other Soulbursted away. The Vindicares killed the Visarch and focused down my last remaining Wave Serpent to a handful of wounds.

In response, my guardians, Wave Serpent, and one squad of bikes fired upon the captains, killing Shrike and one other as well as severely wounding a third. The Fire Dragons, Spiritseer, Wraithblades, and one squad of bikes then charged across the battlefield and trapped all of the Vindicares in combat, surrounding them to the best of their abilities. The Wraithblades killed two Vindicares by themselves, the combined might of the other squads only dropping one, although my Spiritseer and bikes fell as well. As an aside, this is really the way to deal with Vindicare Assassins. When shooting, the assassins ignore invulnerable saves and have a -3 AP modifier, meaning that very few models have a save against them; however, in combat they have five attacks at low strength with no AP or invulnerable-save-ignoring abilities.

Chasing down their quarry, the captains split up, three charging the guardians, and one charging my Rangers, all of the Eldar falling. The melee where most of my army was dedicated then continued, killing two more Vindicares, although one of my squads of Fire Dragons fell.

My actions, meanwhile, saw one more captain die and the Wraithblades finish off the Vindicares. What remained of my army turned back toward the remaining Raven Guard, the Wave Serpent blasting one off the table, while the last squad of bikes made a run for my deployment zone and tried to position itself as far away from the captains as possible.

The roll to end the game failed, and we continued to play on. At this point, my opponent declared that the only way he could claim his victory would be to table me. I had pulled far enough ahead in the scoring that he needed to kill all four squads on the table to catch me in points. Thus, he charged one captain into the Wave Serpent, which by this time had only two wounds remaining, and charged the other towards my bike squad, catching them by the luck of the dice. The bike squad of course folded almost immediately, but the the toughness of the Wave Serpent kept it alive, one defiant wound allowing it to fall back.

At that point we called the game. He had too many squads to finish off for his win to be accomplished before the end of turn 7 since I was making sure to keep the Wave Serpent quite some distance away from the Fire Dragons and Wraithblades.

This game was probably one of the most obnoxious I have ever played. The game was incredibly boring when all I really had to shoot at was Vindicares, which subtracted 2 from my to hit rolls and made my shooting pretty much worthless. It felt like nothing I did mattered or had any impact on the game since when any of my shooting did get through, it was either negated by the Vindicare’s Invulnerable Save or soaked into the model, each of which had five wounds.

Amusingly, at the very end of the game, my opponent was very, very certain that he could kill my Wraithblades in one turn and asserted he had only lost because the dice screwed him out of wasting my Wave Serpent. I am not entirely certain where this logic came from since the Wraithblades were still at full health – with a glorious fifteen wounds in total (three per model) – and I was making certain to place the Fire Dragons far enough in front of them to ensure that they would be charged first. That way, the Wraithblades would get their extra attack on the charge, which generally gave them the damage output necessary to easily kill a five wound model.

However you look at it, I was pleasantly surprised that I won this game, although I am considering swapping something out with Striking Scorpions or similar to tie up backfield units. That simple switch would have made this game a lot easier, but I am left wondering how helpful that would be in my other games.