Red and a friend played a garage-hammer game of Warhammer 40k.

Not wanting to write another list, I decided to stick with the one I have been running for a while. Since Fate of Konor is over now, I will probably write out a new one, but that is for another time.

One of our close friends, my opponent ran Necrons, a lot of the models being familiar to me since I had painted some of the little robots. Still, I have not played against Necrons since the advent of 8th edition, so it will be interesting to see how they fared.

We used Tactical Objectives for this game, drawing three every turn. After having to roll mine with dice since we let my opponent use the cards, I will say that I am looking forward to getting the Craftworld set when they drop. I never liked keeping track of tactical objectives with dice.

After a roll off, the Necrons got to pick which side they wanted to deploy on and stuffed me with the one that had very little terrain. The Cryptek and Lord hid behind the blob of warriors to the right, and a set of deathmarks took up post in the large building on top of an objective. As a note, the picture below is after the Necron’s movement phase. My opponent finished deploying before me, and I failed to seize initiative.

The six objectives are a bit hard to see, but one is hear the generator building in the far back of the board. The second is between the lakes on the other back side of the board. A third is just off to the right of the blob of warriors, and a fourth is hiding on the second floor of the large building behind the ghost ark. The last two are under the deathmark squad above the skull crane and under my guardians on top of the silo building.

Eventually, we might have to make some 3D objective markers to make them a little easier to see in pictures. I have a plan to do 6 different marines, or maybe some Eldar artifacts made from some spare bits. 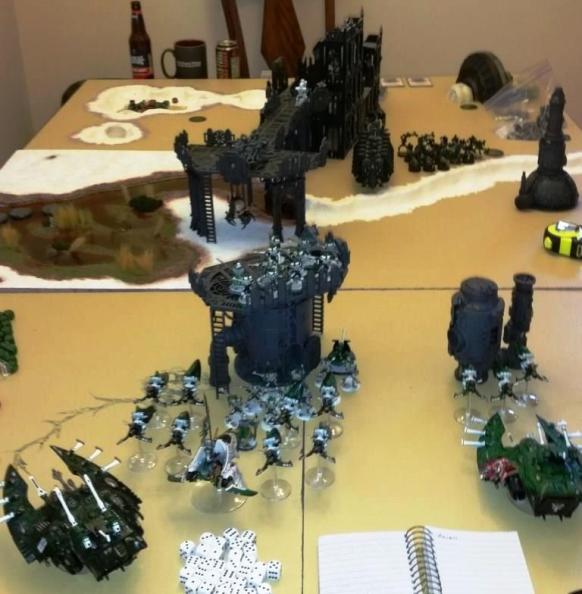 The Necrons, which started on the far third of the board, all advanced to ensure that they were outside of the deployment zone, landing my opponent a victory point. Still, he made certain to carefully place his deathmarks and warriors so they were still holding two of the objectives in his deployment zone, the other set of deathmarks above the skull crane securing a third to finish the criteria for another two tactical objectives – and two victory points. As shooting began, the deathmarks killed 3 of the guardians on top of the silo, and the Ghost Ark killed 4 of the guardians at the base of the silo, 2 more of which fled because of Morale.

On my turn, the majority of my army moved forward to get into range, and having pulled a tactical objective referring to the objective near the generator behind the necrons, I decided to deploy my Rangers there. Unfortunately, the joke was on me because I misread the goal, which said I needed to hold the objective for 2 turns in a row. Either way, the deathmarks died under a hail of shuriken fire, and 3 warriors followed suit although one would come back from reanimation protocols. Meanwhile, the Ghost Ark shrugged off all of my anti-tank weapons thanks to Quantum Shielding.

On turn 2, the two Monoliths deep struck, although their suboptimal 12″ range kept them from deploying behind me. One thus landed in the marsh to the left of the large building; while the other landed in the river just behind the platform with the skull crane. The Ghost Ark then brought the rest of the warriors back to life before using its guns to kill my rangers. The monolith that landed in the marsh killed 1 of my Windriders and put 3 wounds on the Wave Serpent transporting the Wraithblades, and the other monolith killed 1 WIndrider out of a separate squad and put 1 wound on the other Wave Serpent. Lastly, the warriors opened up on a larger bike squad and killed 2 of them, which Morale dropped by another one.

In response, my Wave Serpents disgorged their cargo, the Fire Dragons moving to within melta range of the monolith in the river while the Visarch, Spiritseer, and Wraithblades moved towards it as well. The Windriders then repositioned to take shots at the Ghost Ark, which their combined shooting dropped to five wound remaining (clearly the vehicles with Quantum Shielding are meant to be shot with anti-elite weaponry instead of anti-tank weaponry). The Fire Dragons then killed the monolith, and the resulting soulbursting from the two deaths allowed the Eldar to down 10 of the necron warriors as well, one more running away to morale.

The last turn for deep strike units to arrive, the Necrons then brought in their flayed ones using the marsh monolith’s gate. These moved toward my Wraithblade squad while reanimation protocols brought 6 of the necron warriors back. The Ghost Ark regenerated 1 wound for itself before filling out the rest of the necron warrior squad. The resultant shooting dropped my two fire dragon squads to half health and killed a set of 3 Windriders, the resultant soulburst from one set of Fire Dragons doing nothing since the only shot to get through rolled a 6 for damage. This was easily negated by the Quantum Shielding, although the Necrons had to spend a command point for a reroll. The remaining monolith then finished off the Wave Serpent that had disgorged the Wraithblades, and the Flayed Ones charged them and the Spiritseer, although the Visarch heroically intervened to join in. The warriors and cryptek then locked my remaining Fire Dragons in combat, although their overwatched killed two warriors; and the Flayed Ones killed the spiritseer before rounding on the Visarch (now I realize that they could not have actually chosen him as a target, but oh well). Enough wounds got through to the Visarch to kill him, but the Eldar spent a command point to reroll one save, which suceeded and barely kept him alive with one wound left.  The wraithblades and Visarch then answered, killing off ten flayed ones thanks to the soulbursts provided by the spiritseer and a set of Fire Dragons, which were also close enough to give the Visarch two wounds back. Morale then took 7 more of the Flayed Ones, leaving two of them to hold back the Aeldari tide.

In the Eldar shooting phase, the entire army attempted to focus down the Ghost Ark, but failed, leaving only the melees with a chance of doing much. The Visarch took his swing first, killing off the flayed ones and giving the Wraithblades a soulburst so they could charge and fight the necron warriors. Meanwhile, one of the warlocks charged and killed the cryptek, giving the nearby set of Windriders a soulburst, which was just enough firepower to finally kill the Ghost Ark, although the necrons warriors finished off the remaining Fire Dragons in exchange.

After this point, my opponent conceeded the game, although I was not entirely certain that I would have won. Somewhere along the line, both of us had lost track of victory points, although I am relatively certain we had similar scores.

Overall, a lot of really lucky things happened this game. It felt like I really pulled the win out of nothing. First was the necrons were encouraged to advance toward me to get in rapid fire range. If they had simply kept backing away, I likely would not have caught them, and it definately would have spread my army further out and kept me from soulbursting quite as much.

Although now I know the Flayed Ones should not have been able to target the Visarch since they had not declared him as part of their charge, the very unlikely save I made to keep him around kept the Eldar damage output high enough to kill the Flayed Ones. Without the Visarch, I would have been doing half damage.

Lastly, the placement of the monoliths was really important in this game. If the second monolith had chosen to deep struck in the swamp as well, it would have kept the Fire Dragons from being able to get to it nearly as fast, meaning that it would have stayed alive for much longer. The only thing I had on the other side of the board to deal with these threats were the wraithblades, which did not want to attack the monoliths anyway since the gate of eternity would have killed quite a number of them.