To finish this whole thing up, let’s take a look at some of the new rules for our Eldar – I mean Aeldari (rolls eyes) – models.

Since I am going to talk about rules again, here is the link to the Gathering Storm II: Fracture of Biel-Tan Errata/FAQ. Hopefully GW will come to their senses and put this with the rest of their errata on their store website soon.

Anyway, I am going to jump right in here. 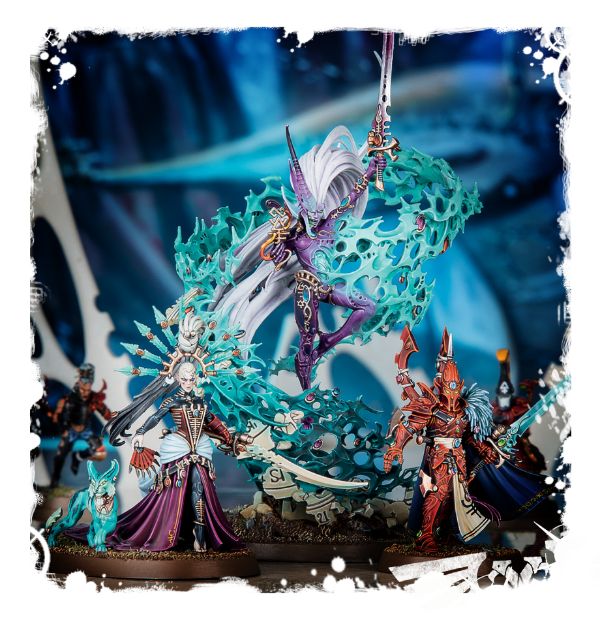 As with a lot of the Eldar characters, the three here are pretty rules-heavy. Yvraine seems a functional caster, although not having access to a decent armor save does not do her well. Craftworlders might be spoiled because of their jetbike seers, but not having decent armor can be painful. The Visarch, meanwhile, appears to be a functional combat specialist besides not having an invulnerable save. It’s not awful; it just means he cannot take on heavy hitters unless he’s part of a giant melee blob squad. Both of them benefit from special rules that give them back a wound on a 4+ when a friendly model dies, and they both natively have Strength from Death. On top of this, the Visarch gets to generate a warlord power even when he is not one, which is kind of useful.

The Avatar of Ynnead, Yncarne, is pretty strange to me. Not quite the melee tank that the Avatar of Khaine is, but with some of its special rules, it seems a great candidate for distraction gambits. It also benefits from a wound regeneration ability although it does so on a 3+. Still, it has to start in Deep Strike Reserves, but can elect to arrive when a friendly unit is slain. It cannot charge the turn it arrives, but since it might arrive during the enemy turn, it is entirely possible that the Yncarne could be charging turn one, provided the Eldar player went second. Producing a bubble of Feel No Pain and Fearless also lets Yncarne buff the rest of the army in addition to its Psychic powers.

All in all, I find them interesting and will likely use them since they pair well with infantry-heavy armies like my Biel-Tani, although I must admit that the reason I like them so much is Yvraine and Visarch are HQ choices that can be taken by any Eldar. That means we finally have HQ for Harlequins, so they are actually eligable for Combined Arms Detachment and Allied Detachment now.

Good news, the one major craftworld with an army style that was pretty much useless up until now has new rules, although you can only take them in Reborn Warhost or their own Ulthwe Strike Force Formations.

Overall, the Black Guardians have datasheets very similar to four of those found in Craftworlds: Guardians (really a combination of Defender and Storm), Windriders, Vypers, and Warwalkers. The only differences is that they are slightly more expensive (around approximately two or three points per model), do not have the option to take Warlock Leaders, and have a new special rule: Webway Assault. This rule allows them to be placed in Deep Strike Reserve and not scatter on arrival, although they must be placed outside of nine (9) inches of any enemy models.

Pretty decent, but it gets better. If you do take them in their Ulthwe Strike Force, which is one of the Formations available to be taken as part of a Reborn Warhost for more special rules, the Ulthwe forces get Preferred Enemy against the enemy army if it has any chaos units and Stubborn. If the Strike Force also has four (4) units, they can Deep Strike on turn one. It might not exactly line up with the Reborn Warhost stuff, but it is pretty nice. It makes for a pretty potent null deployment tactic, and unless you are playing someone who can blanket the board in models, it will nOT be hard to put your models where you need them. For extra added oomph, an Autarch basically guarantees their effectiveness.

That is going to pretty much be it for Fracture of Biel-Tan. Now it is on to other things.