To (Miniature) War We March

Well, I promised an army showcase, so here we go. (Be prepared for pictures.)

​I started in Warhammer 40k not so long ago (2011), but over the course of years, I have managed to amass quite a heap of models. Originally, the starter models of what would become 10,000 or so points of Craftworld Eldar began as a little set of old metal figites my husband picked up off a friend who was getting out of the game. (There were some Tyranids in the group as well, but we long since have sold them to one of our far-away friends back in the Midwest.) I guess you could say my interest was peaked by the 5th edition codex that came with. I read the whole thing cover to cover and fell in love with the graceful (at the time) models and the myriad of colors. I chose Biel-Tan because they seemed the most willing to doggedly fight back and the least resigned to their race’s fate, and I loved the thorn vines that criss-crossed their grav tanks.

All of our painted models – my husband owns the sea of red that is the Blood Angels – hang out on display in a lawyer’s bookcase. I am rapidly running out of room on my two shelves and will likely have to make a new faux-shelf for above the infantry models to extend the storage space. Still, I doubt there is enough space for all of my models if I were to finish them all. (My pile of shame has gotten quite big recently.)

Of course, the Nightwing and Wraithknight really do not help with the space issues. The two of them take up a quarter of a shelf by themselves. The little box and plastic cup hiding in the back are holding extra magnetized bits.

Anyway, speaking of the Pile of Shame, here it is in all of it’s awful, motivation-killing glory. Yes, the four biggest drawers are filled with unfinished 40k models, most of which are still in their boxes. The only ones that got condensed all into one box to save on space are my Harlequins, who are all packed in some ziplock bags stuffed into the lid of the Death Masque box. That way they take up less space and do not overflow into my painting area. 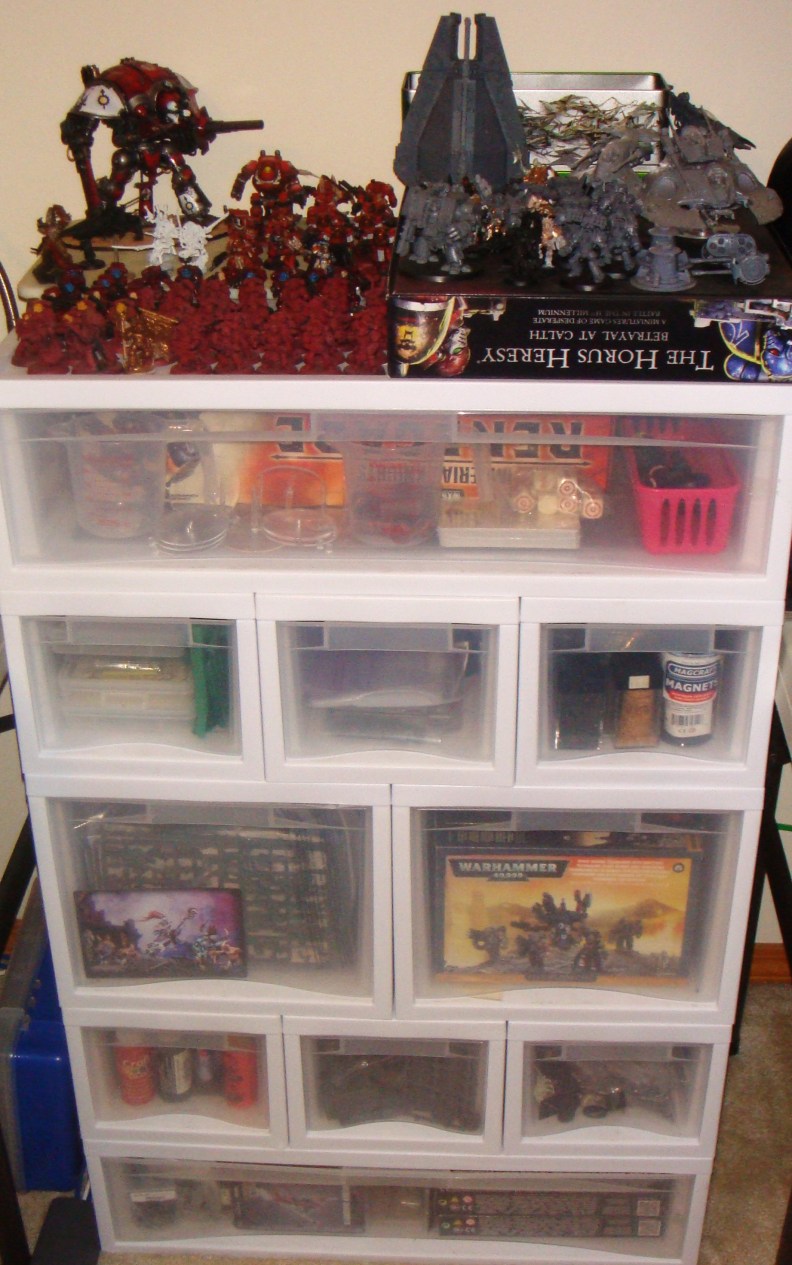 As a quick aside, it may be apparent that my husband’s models seem much fewer than mine. There are a few reasons for that. Reason the first: he started out playing  Necrons,  which are currently being sold to a friend. Reason the second: his models have gotten less attention as far as paint goes. Reason the third: the vast majority of his models just recently got assembled. For one, there are maybe 50 marines sitting in the Pile of Shame designated “Yet to be Painted,” and maybe 50 terminators are stuffed in a box waiting to be primed. They are our dominant project right now, but hopefully they will go a bit faster since I’m getting the husband an airbrush for the holidays. (He’s far better at it than I am, and I hope that much will  encourage him to paint most of his own models.)