The most recent 40k event my local gaming store decided to run was a giant apocalypse game.

We put the store’s three tables together in a big “U” shape, which made navigating the board problematic – and got through two turns before people started packing up to go home. Most of the players were instructed to bring 2000 to 5000 points worth of models, although one brought something around 12000 and convinced the tournament organizer to change the scenario last minute.

Since both I and my husband were considered “Team Captains” – which in effect did not really mean anything other than people were directed to ask us questions at the beginning of the game – we both had to take 4000 points. Well, I did. Since my husband got placed with the 12000 points guy, he was encouraged to take more, but as we were told of the change the night before the game, we were up most of the night writing lists just to get the 4000 points.

I decided that I wanted to primarily take things that I rarely field in game, with the caveat of it having a few nasty tricks since I had no idea if my team was going to end up with two people or twenty. (Turns out we had about seven.) I fielded them via a Reborn Warhost, a Combined Arms Detachment for the Forgeworld models, and the Phoenix Court of Khaine. 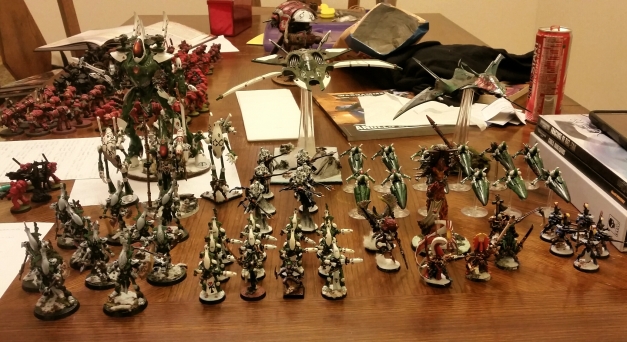 My husband, meanwhile, decided he wanted to field terminators – a lot of them. He ended up with three Archangels Orbital Intervention Forces, and a Combined Arms Detachment. Conspicuously missing from the picture is the Void Shield Generator since it was still chilling out in its box. (Since it is not yet fully painted, we have not glued it together yet and still use the original box to transport it.)

We ended up with this strange story about how the 12000 point marine army + my husband’s 4000 points of Blood Angels were instructed to purge whatever planet we were on, which was infested by chaos and landed on mid-game by Tyranids. What it ended up as was my husband and the 12000 point guy got set up on the right hand table, two demon armies got set up in the left hand table, and a bunch of miscellaneous imperial and xenos armies got set up in the middle table. Two Tyranids players showed up late and eventually came on the ends of the left and right tables that did not touch the middle table.

Middle Table towards the Right Hand Side – Imperial/Xenos Alliance 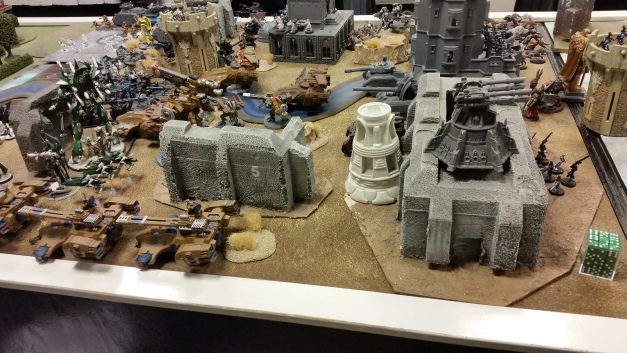 Middle Table towards the Left Hand Side – Imperial/Xenos Alliance 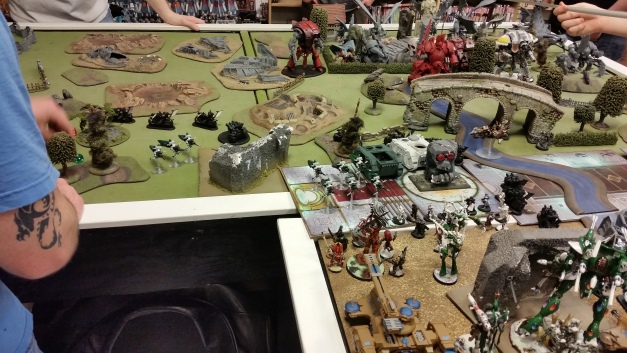 Although it started well enough – the Imperial/Xenos Alliance got first turn and was able to finish in 40 minutes, our drop-pod heavy Space Wolves player remaining in reserves to counter-strike anything too powerful that came in – everything quickly descended into madness. The Blood Angels and Iron Hands went second, and with the ability to call on reserves whenever needed, we saw somewhere around eight Iron Hands drop pods appear in the board between us and the awaiting ship. This presented an even bigger problem besides putting a wall of armor between the Imperial/Xenos Alliance and their victory; the Iron Hands player was now spread everywhere across the board. With a much greater number of points, his efficiency slowed to a crawl, and the turn timer (set at 2 hours for first turn and 1 hour for every turn thereafter in the hopes that a large number of models would have been removed by then) started to really matter. Although he took the whole time to finish, my husband was left waiting for much of the phases to pass since he had roughly a third the points of the other player.

The Daemons’ turn proceeded pretty quickly, but failing charge ranges saw them do pretty much nothing. After that, we added in a fourth team of two Tyranid players, but unfortunately, the amount of models they had to set up saw their turn timer run out before they could do more than get on the board (in hindsight, they probably should have gotten more time).

Past this, the Imperial/Xenos Alliance got a second turn, but it progressed much more slowly. With most of us shooting at the Iron Hands player, he ended up running around and being pulled back and forth by both sides of the board. I deep-struck my surprise bomb of ten (10) Wraithgaurd with Wraithcannons, accompanied by a Webway Portal Archon in Armor of Misery and a Shadowseer with Mask of Secrets and Psychic Shriek, in the midst of a large knot of daemons. I felt a little bad using this tactic, but I wanted to try it out since I finally had all the models together to use it and I thought an apocalypse game would see its efficacy decrease at least a little bit. I was pretty wrong. The Shadowseer wiped a Daemon prince off the board with Shriek, and the two rounds of shooting the Wraithguard got melted a Lord of Skulls. With the Brass Scorpion gone via a Macro Cannon in our backfield and the majority of their Rogue Knights glanced to death, this left the Daemons with very little.

At this point, two of the Imperial/Xenos Alliance had to pack up to leave, taking away most of our super-heavy support that was acting as a rear guard agains the Blood Angels and Iron Hands. The whole game pretty much unravelled after that, and after the Iron Hands player finally got through all of his turn, the game disbanded.

Although, for the first turn at least, we did very well, the number of people and teams we had really bogged everything down, which was made worse by our oversized 12000 point army. We figured, if we were to do anything like this in the future, we should decrease the maximum amount of points allowed, set up the deployments differently (one team along one long edge facing off with the other team along the other long edge), and enforce the sign-up sheet.

It seemed that a lot of people really wanted to have a narrative reason for the game, but without having the people really set, it was incredibly difficult to create a functional story without knowing who was going to show up and who was not.

It was a good learning experience for my husband and I since we are taking over parts of organizing and running these 40k tournaments for our gaming store. Hopefully, we will be able to set up some fun things for people.