The party returns to Dracholt for their reward and goes off to rough up a band of gnolls terrorizing the peasants. 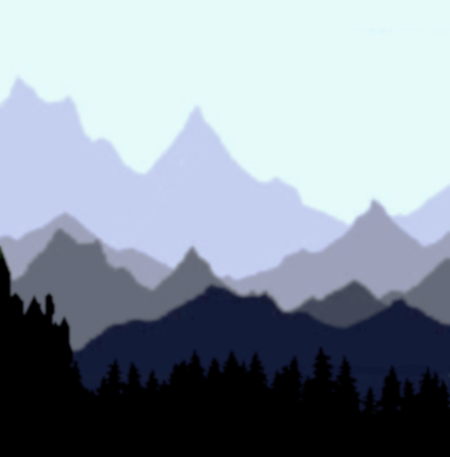 Still left with what to do with the news about Krizia, the party argued about what to do with her. Thokk and McFadin and Aldin are of the mind to just give her a bit of money and leave her in Everwinter, but Crux insisted that they bring her along, convincing the sailors in the meantime that she would mean them no harm. Amusingly, as they sailed south, the presence of the little girl seemed to make everything all the better; no monsters came up out of the deep to attack the Trumpeter.

Along the way, Crux attempted to teach her a number of different spells, although she really only latched on to Tenser’s Floating Disk, it becoming obvious that although she had magical talent, it was muted. During their time together, Crux and Krizia spoke often of religion. The kobold poked and prodded to see if she would convert to his dragon-centric ideology, but the little Tiefling girl seemed rooted to what her parents had taught her. She referenced her mother’s book often, citing stories from it although with some difficulty and asserting that her gods created the dragons; she even went so far as to show Crux her three little statues of what she called the “Lords of the Undermarch” – Mortus Verunt “The Harvestor”, Falcorpis Viribus “The Smith”, and Admotus Contritum “The Shadow”. As Crux had regarded them – a robed skeleton with an hourglass, a bat-winged woman casting a spell, and a feather-winged and tattooed man holding a hammer – he recalled seeing such things before in Alaera’s chapel. McFadin had mentioned something about them being three of the Dieusérie – the evil gods – according to the Empyrean Creed, but Crux could not remember the names.

Upon returning to Dracholt and mentioning that the Tiefling Ekaterina maybe followed the same religion as Krizia, who seemed to show a spark of almost recognition at the name, the group found Alpharius near a newly-constructed fountain. Peasants swarmed around it and around him as he stood instructing a number of people to fill barrels with the water, and as the party watched, a small farming family approached.

The farmer, his wife, and their child were all clearly sick, large swollen pustules poking out around the collars of their clothing, but the peasants near the fountain showed no fear, rushing to help the three forward. As they neared, Alpharius scooped up cupfulls of the fountain’s water, and the three drank it down greedily, the pustules and other symptoms of their disease quickly fading away into nothingness.

Although somewhat impressed by these feats, the party expressed caution as Alpharius led them back up towards the castle. McFadin specifically warned that using magical items in such a way may have repurcussions somewhere along the way, but Alpharius was certain that his careful preparations and studies had yeilded stable effects – one seal was the source of the clean water in a number of fountians in Dracholt’s lowtown while the other seal had augmented the waters of one specific fountain to cure diseases. Alpharius claimed it was a lucky chance that the second had allowed him to do as much since a plague was spreading through the farmers nearby, but he quickly moved on, mentioning a menace along the Kabyss River. He was surprised that the party had missed it considering a number of peasants had sought refuge in Dracholt and were now talking the ear off the King and Seneschal.

Determined to find out more, the party left Krizia with a mildly confused Alpharius and went to speak to the King, although instead they found the Seneschal listening laxly to a haggard peasant spinning a yarn about some great dog-beast with fur as black as the darkest night and eyes that glowed red as blood. It had come with a pack to eat them all, and the aura of death it radiated had been almost palpable.

“We shall slay this beast!” Aldin announced, cutting off the farmer as they approached.

“Wonderful!” the Seneschal exclaimed, seeming to wake up a bit from the pseudo-nap he had been taking while the peasant had spoken.

“But surely there would be some sort of reward for such a task?” McFadin suggested.

“Done!” Logan exclaimed. “Although what do you want to demonstrate that we have completed the task? A head?”

“Whatever you see fit, just bring it back. It does not matter much as long as the deed is done.”

And with that, they were off. Crux summoned a phantasmal steed to pull their cart at ridiculous speeds, and the party screamed challenges into the mountains, daring the creatures to come out and face them until a deluge of arrows poured from the trees across the river. Wagon skidding to a hault, they all leapt into action, Aldin taking to the skies astride Silvacet, who easily picked out the strange black creature the townsfolk had mentioned. Flying past it as arrows streaked by and clanged off his blackened armor, Silvacet swerved in close and Aldin reached out, hand grasping ragged chunks of armor. The wearer was hefted bodily from the tree in which it had perched, and after the black gnoll flailed uselessly at the paladin, it was dropped, somersaulting where it landed amongst the rest of the party.

With a howl of rage, Thokk brought his axe down upon it, but all that fell away were squirming tendrils of darkness that wriggled along the ground. The gnoll howled back, the fangs in its mouth dripping putrid, green saliva as they latched onto Thokk’s arm and tore away flesh. Bloodlust shown in the monster’s eyes, and it savagely swung its jagged sword at the barbarian, only to be thrown off-balance by a magical blast from Crux.

An arrow embedding into his shoulder, Logan let out an enraged howl and lashed out at the black creature before them, shearing off more tendrils, some of which clung to his arm and sought an opening in his armor before he desperately brushed them off. Its response another enraged howl, the monster swung again, cutting long gashes into Thokk’s arm with its sword but its venomous teeth closing around nothing but air. The half-orc took a staggered step back, breathing hard, but as the black gnool raised its weapons again, a blur of armor and feathers descended from the sky. A blast of daylight and clap of thunder slammed into the black creature, and all that was left turned to liquid. Black, burning, acid-blood splashed across those standing too close, Logan howling in pain as Thokk, McFadin, and Crux dove for cover.

An amulet, the stone black as night, dropped into the dirt where the black gnoll had been. It was all that was left of the thing, but no one paid it any heed. Instead, they searched for ways across the river, McFadin simply diving in to swim across while Aldin and Silvacet simply flew. Crux cast a spell from underneath their cart, the magic of his words and gestures freezing a bridge of ice across the waters before a giant tree felled by Thokk and Logan crashed down atop it, nearly bludgeoning Crux and McFadin with its branches.

Splatters of gore heralded the deaths of the gnolls, and as the party returned to their cart, hefting the heads of their kills into the back, they noticed the amulet. Crux bent over it and studied it closely, his magic aiding his eye, and although he declared it magical and useful, he was still suspicious of it and refused to touch the thing. McFadin confirmed the kobold’s thoughts but shared his reservations, staring at the black gem dubiously as Aldin scraped black gnoll paste into a jar.

“So we can show the Seneschal,” he clarified as the others cast odd looks at him.

I did not know this until after the spell had been cast, but Identify does not actually reveal curses on magical items. You can hint at the item having a curse since players can be a suspiciuos bunch, but there is almost no way to efficiently reveal a curse on an item. The curse is supposed to be a surprise generally used for dramatic purposes.

I have determined to allow players some skill check to investigate any cursed magical items that may come up in the future, but even on a success I only intend to give a strange description of the item. For example, the amulet above was an Onyx stone set in iron fittings except, while dry to the touch, it appeared to always be covered in blood, on top of radiating a heavy aura of anger.