I took another step in my Corsairs project, and it turns out my original idea for the basing did not really work out either.

I wanted to make use of a Marshland flocking that I recently bought and thought it might look good with GW’s Martian Ironearth crackle paint. Turns out, I was pretty wrong, and although the crackle paint really looked nice with the Corsair color scheme, the moment I added the flocking, the basing just seemed off. The brown and orange seemed to clash, so I coated the orange in some brown ink to tone it down. In the interest of not scraping the texture paint off to try again, I think they turned out passable, and I really like having the timeline of my painting to look at. (This is the reason my first models have not been re-painted as well, although I hesitate to even think about that since my pile of shame is pretty bad right now.)

(Pardon if the models look a little strange. I use a gloss varnish on all of my models because paint flaking off irks me to no end, and I like the glossy look in person even though it does awful things to my pictures.) 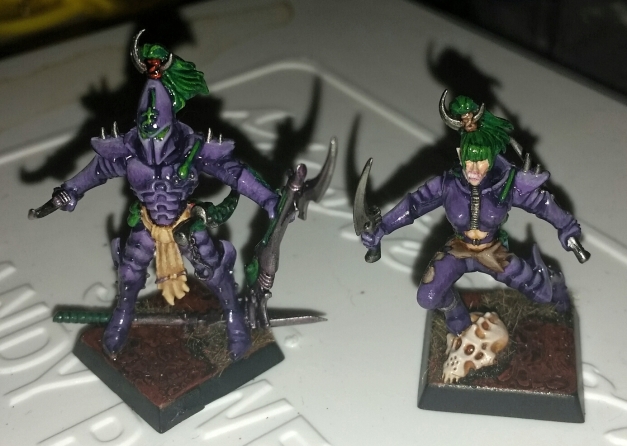 The Wych was also a somewhat important model to figure out before I moved onto the Skathach since she gave me the opportunity to try out different shades of brown. I quite like how her loincloth thing ended up; it looks sort of like a leather and is very easy to differentiate from her skin. It also let me do some bright colors on her combat drugs to see if some colors would go well with the purple, which is important for the Skathach since he will likely end up gemmed-out like the rest of my wraiths but with different colors. So far, I’m thinking the blue looks great, but that I should use more pinks instead of red and start the yellow in oranges before working up.

In the idea of adding more visual interest without making the color scheme overly busy, I decided to have the skinsuits and armor plates be slightly different. So armor plates get the bright lilac highlight whereas the skinsuits remain darker

Overall, I think the crackle texture looks very odd next to the marsh foliage, so I went out and purchased a big bottle of GW’s Stirland Mud texture paint after grilling our friends at our game store about it. I look forward to trying it out on a third Corsair model to see if the overall effect is what I want, but I will probably use that with a green wash to lean more towards the marshy base I want – I have done this with a previous model and it looked alright on him. If I remember right, that green is layered on there pretty thick over multiple coats, so going a little easier on it might end up with a better effect.